If you're an Australian small business, should you prepare for a 2020 recession?

The real risk of a recession in Australia

In an opinion piece written for the Financial Review on Aug 29, 2019, the former Australian Prime Minister Kevin Rudd argues that Australia has a one-in-three chance of entering a recession in 2020.

He points to various geopolitical and global economic forces which can impact on Australia and cause a significant economic downturn.

Rudd says that the global storm clouds which are gathering require some major government policy shifts - only then could a recession be avoided. But besides Rudd, there are many other commentators who warn of a coming global recession.

Here is a headline warning written in the Guardian in early August, 2019 -

The risk of course, is that once enough people start believing that a recession is imminent - then it can create a self-fulfilling prophecy. Consumers become excessively cautious and conservative in their spending - impacting upon business sales, cash flow and profit.

Having said that, we cannot ignore that the Chief Economist of the Australian Institute of Company Directors, Stephen Walters, in a recent speech delivered to Melbourne University's Faculty of Business, said this -

Here is a short video recently produced by Finderrec.com, warning of the risks of a recession for Australia  in 2020 and describing seven signals which point to it -

So what does this all mean to you as a small business owner? .... The formal definition of a recession is commonly taken to refer to "two consecutive quarters of negative economic growth"

What tends to happens in a recession?
Small business tips for surviving a recession

So what can you do? ...... Let's not over-react or panic - it would be way to premature to say go and buy up stocks of gold for currency, sell your stamp collection and go live in the hills. ....... However, some common sense steps are still warranted to prepare your business for a potential major economic downturn -
Worrying won't help

There's no point worrying about global forces that are beyond your control. It would be unhealthy to become anxious and panic about the prospect of a recession in 2020........ Besides, nothing is certain here - but when the weather radar starts indicating storm clouds are heading your way, then it's usually wise to at least prepare to take a raincoat out with you.

There are some simple things that you can do now in your business that aren't too radical.  Small actions you can take - that will help you to prepare and position your business for a potential economic downturn next year. ....... And remember too, that any downturn will always be a temporary one - and that opportunities for growth and expansion will eventually follow.

In business, if there's one thing I've learned over the years, it's this ..... There is a time for boldness - and a time for prudence. Success partly relies upon judging the circumstances that you will be facing - and then acting accordingly.
Posted by Brian Carroll at 4:52 AM

For Entrepreneurs -- The inner game of business

Self-awareness is essential to succeed as an entrepreneur When you're preparing your business plan, you do a careful assessment of ... 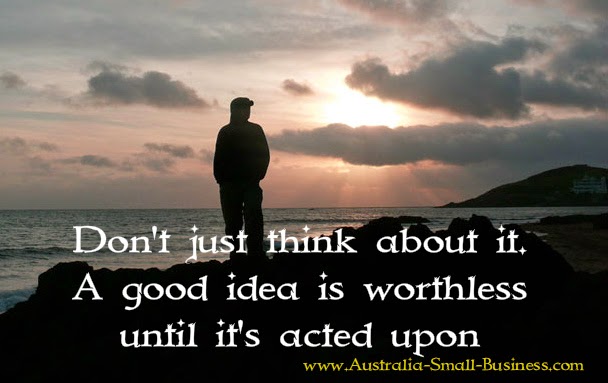